Showing posts from June, 2017
Show all

The MisEducation of Love

- June 10, 2017
Who did you learn about love from? Do you feel like you got a good education on the subject? Or as you got or are getting older, do you see that maybe you were taught by someone that wasn't quite a master on the topic themselves? Often I would say that experience was my best teacher. However, how many times did I have to go through a bad situation to realize that it wasn't healthy. All I was trying to do was love someone or be loved. I had no clue what healthy love was. All I knew was that I was desperate for love that I could feel. And when it hurt, I felt it. I felt something. There is a twisted dark world we live in, even if we would rather put our heads under a rock and ignore it. We can try but that sneaky devil will attempt to come to you anyways. I worry about the young girls or tweens in my life. Mostly because I remember being one. It was a tricky time then and now it seems to be so much worse. I have so many thoughts and wisdom I want to share with them but I
Post a Comment
Read more

Best Part of Waking Up?

Are you a coffee drinker? If so, then you may be like many of us that go straight to the coffee pot at the beginning of each morning,  first thing. With kids in the house, coffee may not be an immediate option but it is high on my priority to at least brew it. That first sip or two is so relaxing and I don't even know why. It seems to be a habit. I drink a lot of decaf and I still like it. I crave it. Some coffee just smells so good. Its all good if you need to go get a nice hot cup of jo right now. My happy go lucky son has been begging for my coffee lately, it puts him in rare form. He was literally climbing and hanging on the edge of the counter. He wanted that drink and I don't think he knew why either, other than the straw and that it was mine. Is it a little odd that the first thing many of us put into our bodies is this brown, hot liquid, perhaps muddied with cream and sugar? What if instead I woke up and ingested something spiritual before anything else? Gr
Post a Comment
Read more 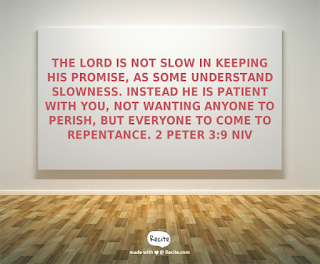 How long does it take you to get ready to go? Maybe it changes based on where you are going, or whether or not you have a babysitter. Do you know anyone that is always late? Maybe that is you. I am getting better at that but still guilty of being late often. Its a bad habit. And I'm working on it. Are you ready for Jesus? Like, do you want Jesus to come back tonight? While my instinct is to say "yes, of course", I have to pause and get honest. Admittedly, I am a little scared of the unknown. Not overwhelming fear, like when I was a teen reading the Left Behind series, but a bit of an uneasy feeling. Do I know anyone that is not prepared spiritually for that moment? This post was initially inspired by a song I was listening to on Spotify by Trip Lee. It is called Ready (feat. Dimitri Mcdowell)  about losing his father and facing death. Little fact about me, I like rap music and I really like Trip Lee's lyrical style. After discovering this song, I decided to ema
Post a Comment
Read more
More posts