- January 20, 2017
Today is Inauguration Day and we have officially sworn in a new President. So I thought it was only appropriate to time this post for this specific moment in history. Actually, if by chance this spreads on the Internet, I take no credit and pray that God is glorified somehow through my words.

I don't even remember watching anything about previous Inauguration Day coverage in my past but my father in law reminded me that it was probably because I was working then or too young. This election, this President, it feels somewhat surreal. There is much division and fear among the people. I can see from friends of Facebook that share political posts that even strong faithful Jesus followers are not all fans of the new President. Others are supporting and applauding him.

In my teen years, I was taught how to play euchre. It was fun and nice to be included in something (my parents really just needed a fourth player, but hey). As a twenty-something I jumped at the chance to play the game. 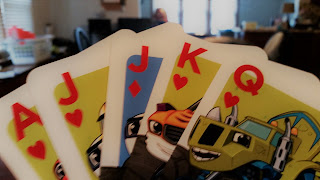 In the picture, that is what I would call a beautiful loner hand. I would totally go alone if I got the chance. That doesn't happen that often. But the trump is hearts. Jack of hearts, the right bower, is highest, then the left bower, the Jack of diamonds, then Ace, King, and Queen. The ten and nine of hearts would be the only other trump. Depending on who got to go first, I would win the trick and then throw down my two bowers and clear out the nine and ten. Its not as fun to play when the other team has a hand like this (I like to win).

Where on earth am I going with this? Two points. First, don't try to go alone at this life and think you have all the cards you need. Not everyone was born with a handful of trump. Remember that when dealing with others. Secondly, this is our Father's world. Let's not forget who is the real boss, the real commander in chief. God created the world. God has a plan. Don't let fear drive you.

Cast all your anxiety on him because he cares for you. 1 Peter 5:7 NIV

When my daughter was four months old, I was listening to the Veggie Tales version of This is My Father's World. It made me cry. It made an impact on me with all the fears and anxieties I had during that time. Maybe it will comfort you to listen to it.

Father, Thank you for Your amazing Word and comfort. Thank you for the privilege of being born in America and let me not take my freedom for granted. Thank you that you did not force yourself on me but offered me the ability to choose to follow you. I'm so grateful for the many times you have provided me the hope to continue on when the days seemed dark. In Your Mighty and Saving Name, Amen.

Popular posts from this blog

I'm so glad I decided to keep the latest Britt Nicole cd just for me. It was on sale during the Black Friday event and I grabbed it thinking I may give it out as a gift. I love music and eventually, like January, I opened it as a gift to me. My 3yo daughter really loves this one song in particular, No Filter. I enjoy it too but its just so cute that she requests that I play the "picture nus" song. The lyrics speak to me about how its so easy to portray my life, particularly through social media, but even just with family or at church, that things are going great. We can get good on putting on an act, don't we. Part of it might be that I don't want to burden anyone or I don't even understand what the problem is. Some things are best to be private between a couple or family. I think it gets interesting when we deal with the pressure to be "ok" and "happy". Are people going to be able to come along side of you and offer support if they aren&
Read more

- December 15, 2016
Who am I and why am I here? And why do you care? Who I am? My name is Angela and I'm a mom of two. I'm also a wife, a daughter, a sister, and a friend. For years, particularly the twenty-something years, I was desperate to find my identity. Now as a mom, I don't want to lose that grip I just gained on finding my identity and replace it with one of the many adjectives I could find to describe the roles I have in life. Who I am is not simply defined by the titles of mom, wife, or friend. Who I am always has been and always will be defined by the Great I Am, my Lord and Savior Jesus Christ.   Here are some links about identity in Christ: Believe Who God Says You Are  Rick Warren Knowing Who I Am In Christ  Joyce Meyer Why am I here (on this blog)? Since as long as I can remember, writing has been therapeutic for me and has been the most effective way for me to express my deep feelings. As a child, I could have been described as shy, and writing became
Read more

My Blog to God

- October 22, 2021
I haven't been writing much but I still have the desire to write. I actually have several started ideas saved just hanging out in interspace. Perhaps it is the season I am in with #momlife.  Before I had this blog, even before I had kids, I had a blog. I used to type it out on my computer or write in a journal. My audience was God. My goal was to communicate. It was authentic and raw. It was a lifeline to Jesus.  I am questioning why the struggle to post much content on  Just A Mom From Ohio . In Bible study recently a topic of motivation struck me. Have I lost touch with the heart of the blog? Am I writing about God or for God?  Since I was young, I felt like God lit a fuse in the writing part of my soul. It came naturally. It was a way that I could communicate with others and with God.  I wrote a lot of poetry in high school. Writing poetry was a way to organize thoughts that I couldn't even speak. Today I would consider it a form of prayer. My heart was crying out to God o
Read more