- February 20, 2021
Last night I was looking for a show to watch on Netflix that wouldn't get me sucked into a series and yet would be more than a cooking show or another organizing show, even though I love those. I landed on a show about being minimalist. I've learned about it in the past but I thought it was cool that it was less than an hour and it related to being organized but was a little deeper. The show was called "The Minimalists: Less in Now" and its new (2021) and the guys are from Ohio 😜.
So this morning, while at home with the kids on a precautionary quarantine, I had started to purge random areas. In that effort, I found an old notebook that I kept saving. I opened it to see notes from 2010. These were notes about a specific memory of a pivotal time that changed my approach and outlook on my faith and relationship with Jesus. 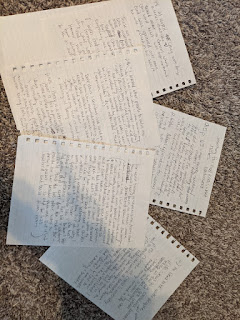 Why don't I remember taking these notes? I'm going to attempt to explain my selective memory from my life experience, not in a scientific way. I find it interesting that I've gone on purging attempts in the past and this notebook has survived the cut each time yet it didn't impact me much until today. So what is different?
You may know that I have done EMDR over the last couple years as a part of my own healing journey because I've written about its impact in past blogs. I've made growth processing my first negative belief that I was never supposed to be born. That one is deep and its tentacles reach into every part of forming my identity. I wanted many times to skip past that unhealthy belief in therapy and move on. It took a long time to get to where I am now and its truly a combination of the last 10 years of effort and life experiences.
When I sat down with a pastor in 2010, I was in a really raw place very much still wresting with the belief that I was a mistake, never supposed to be born, and feeling rejected and ignored. I had a mistaken idea that the church building was more than it is (a place made up of four walls). I wanted the church building to be my refuge and that is not where I should have been going. I needed Jesus. A family member had a name on a brick in the building and I felt a sense of belonging because of that. After my grandma passed and many of the family was no longer attending there, I lost my sense of connection. I was relying on the past and not living in the present.
When I look back on the past, I tend to only see it through my lens. When I was at work in my early career, a boss told me that "there are two sides to every story and then there is the truth". Not saying that what each person remembers isn't true to them but it is likely fueled by emotions and their own individual life experience shaping the reaction to the interaction.
Isn't it amazing what the human body and brain can do? God created us.  There is so much that experts can't grasp yet and may never be able to fully comprehend.
Why does my mind recall what it does?
EMDR is so unique to each person. I wish I could understand what my counselor is feeling on the other end of it. Sometimes it can be dark and heavy, other times it sheds rays of light.
Connecting the warmth of sunlight from a window on my arm in a EMDR session has changed my acceptance of God's provision.
I felt so alone as a kid. I was in a deep hole emotionally growing up that just got bigger and darker as I got older. God was always a part of my life but so was the enemy. He's been chasing me for quite some time. I'd let the lies of the enemy drown out the light of my Father because they were more evident to me, more pronounced, and reinforced by people that were "Christian" and said they loved me. My memories of the bad tend to outweigh the memories of good. But God was there protecting me. I see it now. 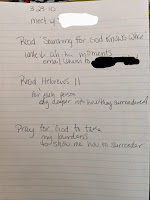 Seeing the notes this morning reminded me that not only did I get fueled to seek Jesus differently in my life after that meeting, but I did more than just get mad. I did work. And it also reminded me that the pastor didn't dismiss me as I previously believed. We made a plan for me to follow up with him. That is a big deal. I was so used to being rejected and ignored and dismissed by a few people that I applied that negative belief on that memory up until today.  I don't remember ever sharing the notes with him or actually discussing it with him again. I eventually sent him a new copy of the book he let me borrow because I was too unwilling to go and talk to him again. I didn't go back to that church until awhile later and I didn't honestly want to. I was holding onto some resentment that wasn't actually rightly placed.
The way I originally remembered that part of my life served a purpose. I got so mad that I actually chased for Jesus and He revealed His love for me in an undeniable way. It was completely worth it. I knew that the Holy Spirit had allowed that challenge for me because I wouldn't give up on Jesus.
Thinking back I can't figure out why I took the notes if I was never going to share them?
If these notes say anything to you today, may it be that our past is real to us but let God continue to work on showing us how He can use it.

Author Note: I was raped as a teen and as with any rape situation just about everyone will doubt you at some point. As I was writing this, I kept feeling the need to remind anyone that just because I had a new thought about this specific memory in my life, that it in NO WAY does it change anything about what happened to me the day I was raped. It took time to fully accept and be ok with knowing I was raped. Even though I know in my heart that I don't have to justify it to anyone, I still had to process it for myself. I didn't want to be raped and I don't think anyone actually does.

Holy Spirit, Thank you for revealing this insight to me today. Help me to continue to grow in my acknowledgment of Your presence in my life, in the good and the bad. Thank you Jesus for the sacrifice of leaving heaven to walk this earth and then die and unfathomable death and for raising from the grave to restore me to the Holy Trinity. I'm grateful that I am learning that my pain has a purpose and can be used for good and for Your glory. Help me to remain humble and submit to Your sovereign plan. In Jesus name, amen.
Please follow me on Facebook or Instagram. Like. Comment. Share.
Thank you! God Bless

Popular posts from this blog

I'm so glad I decided to keep the latest Britt Nicole cd just for me. It was on sale during the Black Friday event and I grabbed it thinking I may give it out as a gift. I love music and eventually, like January, I opened it as a gift to me. My 3yo daughter really loves this one song in particular, No Filter. I enjoy it too but its just so cute that she requests that I play the "picture nus" song. The lyrics speak to me about how its so easy to portray my life, particularly through social media, but even just with family or at church, that things are going great. We can get good on putting on an act, don't we. Part of it might be that I don't want to burden anyone or I don't even understand what the problem is. Some things are best to be private between a couple or family. I think it gets interesting when we deal with the pressure to be "ok" and "happy". Are people going to be able to come along side of you and offer support if they aren&
Read more

- December 15, 2016
Who am I and why am I here? And why do you care? Who I am? My name is Angela and I'm a mom of two. I'm also a wife, a daughter, a sister, and a friend. For years, particularly the twenty-something years, I was desperate to find my identity. Now as a mom, I don't want to lose that grip I just gained on finding my identity and replace it with one of the many adjectives I could find to describe the roles I have in life. Who I am is not simply defined by the titles of mom, wife, or friend. Who I am always has been and always will be defined by the Great I Am, my Lord and Savior Jesus Christ.   Here are some links about identity in Christ: Believe Who God Says You Are  Rick Warren Knowing Who I Am In Christ  Joyce Meyer Why am I here (on this blog)? Since as long as I can remember, writing has been therapeutic for me and has been the most effective way for me to express my deep feelings. As a child, I could have been described as shy, and writing became
Read more

My Blog to God

- October 22, 2021
I haven't been writing much but I still have the desire to write. I actually have several started ideas saved just hanging out in interspace. Perhaps it is the season I am in with #momlife.  Before I had this blog, even before I had kids, I had a blog. I used to type it out on my computer or write in a journal. My audience was God. My goal was to communicate. It was authentic and raw. It was a lifeline to Jesus.  I am questioning why the struggle to post much content on  Just A Mom From Ohio . In Bible study recently a topic of motivation struck me. Have I lost touch with the heart of the blog? Am I writing about God or for God?  Since I was young, I felt like God lit a fuse in the writing part of my soul. It came naturally. It was a way that I could communicate with others and with God.  I wrote a lot of poetry in high school. Writing poetry was a way to organize thoughts that I couldn't even speak. Today I would consider it a form of prayer. My heart was crying out to God o
Read more